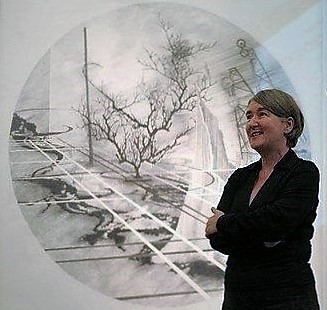 Awarded by AXISweb in June 2010. Selected by Gill Hedley. ﻿ Gill Hedley is a writer, an independent curator and a consultant on contemporary visual arts. end of year exhibition Central St Martin's MA show, selected as the AXISweb MA star of the year Sascha Mikloweitartist

SECOND AS ... was a site specific installation by Sascha Mikloweit for the 2010 MA at Central St Martin’s.

FOURTH AS ... is an edition of two thousand unsigned “to cut out” images inside the 2010 Central Saint Martin's MA Fine Art Degree Show catalogue.

THIRD AS ... was installed in the Charing Cross window of CSM during the MA show.

The constituent parts of SECOND AS ... were a slide projector on a plinth; a series of images; a group of five large sheets of paper, loosely pinned to the wall. Production values were flawless and curious. A label informed the viewer that there were 27 images. The carousel was clearly full (72 slides) so a loop was created with beautiful and detailed images punctuated by blanks of monochrome with delicate areas of oil spill. The plinth was sanded, skimmed with plaster and left unpainted. Each sheet was an enlargement of an email, carefully blanked to erase, conceal and merely hint at protagonists and content.

The images in each slide were forensically delineated in exquisite and ultimately unrevealing detail. Views of a damaged briefcase alternated with a nature morte of papers. A briefcase as subject will usually elicit the same reaction in a city dweller in 2010 as it moves from familiarity to a site of potential danger: “Please do not leave bags unattended or they will be destroyed.” The spread of papers included a programme for “English People Very Nice” at the National Theatre, with £10 seats sponsored by Travelex, and a Prudential retirement plan leaflet. Is this a careful and cultured person? But the flyer was obviously slipped into the theatre programme. Do the London A-Z and throat tablets tell us more or simply add to the generic picture? Are we interested in whose briefcase and papers these might be or rather why/how they were damaged?

Each text was a giclee print on bible paper and the text enlarged (or blown up). Each email was carefully dated, anonymous, between affectionate friends, and to quote the artist’s website: “It is not about being told. Rather this is about what may be.”

FOURTH AS ... is a black and white image of the case stuffed with its papers and apparently in a moment of destruction as spoors of paper fragments surround it.

The window installation THIRD AS ... was a simplified version of an original proposal. Surrounded by orange fluorescent light was the same image as in the catalogue with the text:

Since fluorescence in the blue-violet region is often inherent in the biological system, dyes which fluoresce in the orange, red and green regions are most usefully employed (Christie 2001)

Each work hints at terrorism, exudes an elegance of approach, and hovers between the public and the private in a very controlled manner. Site specificity is particularly effective. The orange fluorescence reminds us of safety measures, highlighter pens and shop windows. The teasing use of the old-fashioned carousel with its particular sounds and educative function added a non-specific back story or mood. To quote the artist again: “all necessary information is included”.